My wife and I decided to give the Naylor a bit of a run this year and decided to visit my brother in law just south of Paris.

We took the 8.30am Brittany ferry from Poole to Cherbourg,taking just over four hours for the crossing spending the time eating and reading in the excellent reserved seating lounge.
Its about 280 Miles to Millet-La -Foret on the edge of the forest of Fontainbleu so we decided to stop on route at Lisieux finding a nice hotel with a secure garage. The run was excellent,with top down, at a steady 50-55 mph with bursts up to 70 for overtaking. Its a dual carriageway most of the way quite quite but busy on the Caen ring road. We could have ambled along down the coast where the Normandy beaches lie but it was just a short visit. 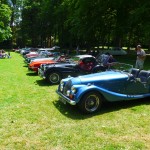 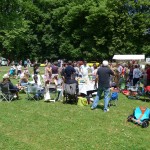 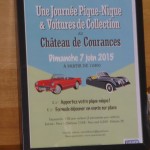 Next day fortified by an excellent breakfast we set off is torrential rain later to be followed by a heat wave 34C! arriving in Milley about teatime this time ambling through the French countryside on their superb D roads.

Every year the local community around Courance have a classic car pick nick at the Chateaux, its an informal event organised by ex pats of various nationalities.  This year their was a large variety of cars,
British classics,French classics even a couple of Bugattis owned by a Renault formula one engineer, there were about 50 cars there formed up in an oval within which people set out food and drink on tables and children played.

The Naylor was hugely admired everyone wanted to know all about it language being fairly international when discussing classic cars. 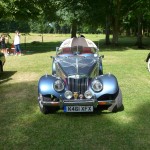